Dolphins live in all the seas but prefer the warmer waters like Mosquito Lagoon and the Indian River Lagoon in central Florida.

Humans have a lot in common with dolphins. They form bonds between individuals that may last a lifetime. Each dolphin has a dorsal fin that is as distinctive as a person's face. The skin of the dolphin is extremely delicate and easily injured just like human skin. Dolphins have been observed physically supporting sick or dying pod members. Dolphins can be quite aggressive, even brutal and have been known to abuse weaker members of their pod.

Watching dolphins is a rewarding experience for humans. Dolphins are very playful and fast learners. They play games with bubbles they make. You are likely to see one playing or chasing fish. Wild dolphins are most beautiful and have a presence of their own. They are great teachers, reminding us to regain our playfulness and joy. 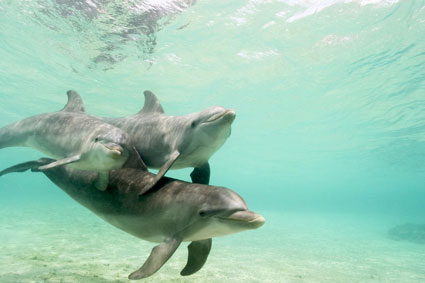 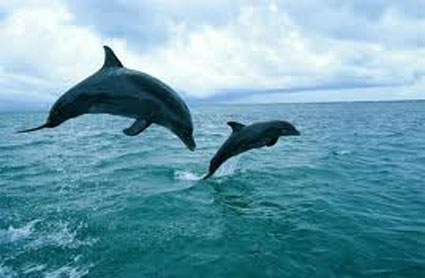 Studies indicate that dolphin vocalizations are complex enough to support some form of language. Dolphins have large brains and, like the great apes, they can learn to understand complicated, language-like commands and a structured language. Dolphins mostly communicate by sounds like whistles or pulsed sounds, which sound like squawks, barks, or rasps.

Dolphins and other toothed whales produce high pitched clicks. When these clicks strike an object, some of the sound echoes back to the sender. By listening to the echo and calculating the time it took before the echo came back, the dolphin can determine how far away it is from the object and its size. This is called sonar or echolocation. 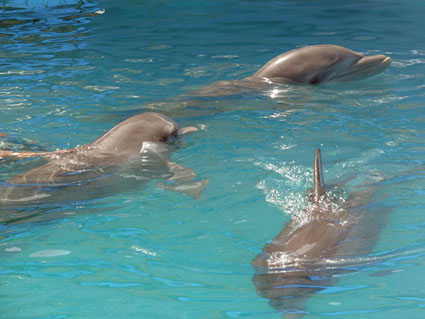 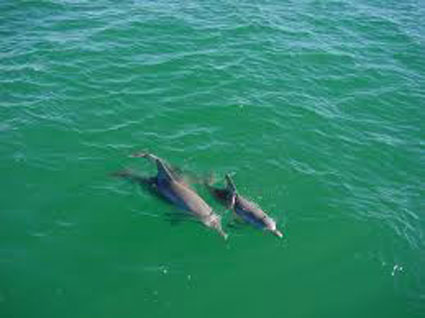 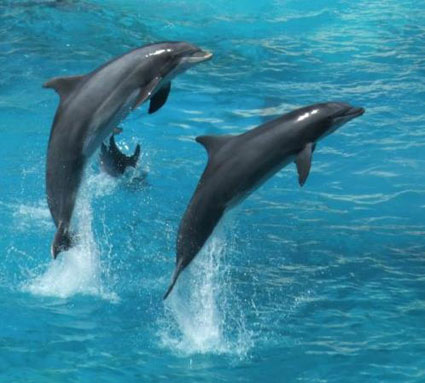 Some dolphin species can swim up to 25 miles an hour for long periods. That equals more than three times faster than the fastest human swimmers. Dolphins can jump as high as 20 feet.

The deepest dive ever recorded for a bottlenose dolphin was 990 feet by Tuffy, a dolphin trained by the US Navy. Most dolphins do not dive very deep and many bottlenose dolphins live in quite shallow waters less than 7 feet deep. Most dolphins live in ocean water which is too salty for them to swallow. If dolphins drank sea water, they would use more water trying to get rid of the salt than they had consumed in the first place. Dolphins get most of their water from their diet of fish and squid. When they burn fat, water is released. Also their kidneys are adapted to retaining water. Even though they live in water, they have no direct source of drinkable water.

Dolphins have very sensitive retinas that efficiently gather light so they can see as well beneath the water as above it. They have a very limited sense of smell. 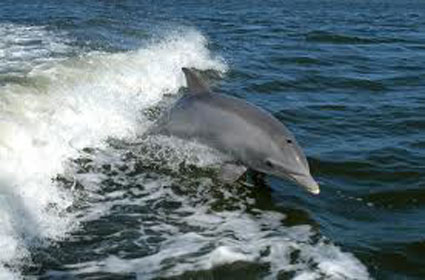 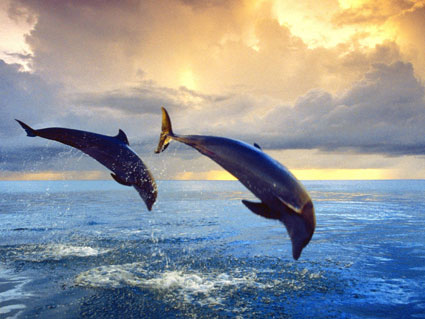 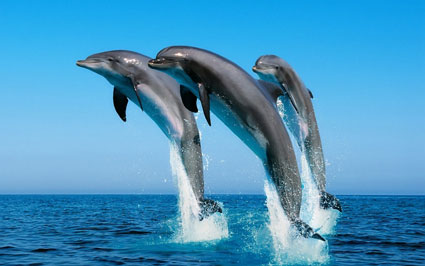 Deep water animals are the species that most often beach in groups. In some highly social species, members may follow a sick leader. Sonar does not represent sloping sandy beach properly. They detect it only when they are almost stranded and they panic.

Dolphins and whales and may be navigating by the earth's magnetic field and could be misled onto beaches by field disturbances.

There is evidence to suggest that when under severe stress or in panic, the dolphins or whales may revert to the behavior of their early ancestors and run towards shore to find safety.

When a solo whale or dolphin beaches itself, it usually is extremely sick and exhausted. There are a number of theories that try to explain the occurrence of groups of dolphins and whales stranding themselves on the beach but no theory can explain all of them.

You may encounter wild dolphins when swimming, boating or snorkeling in certain areas. Remember that in the United States it is illegal to directly approach dolphins. If the dolphins come to you and choose to interact, that is allowed. It is illegal in the US to feed the dolphins, and is highly undesirable, because it changes the dolphins' behavior. 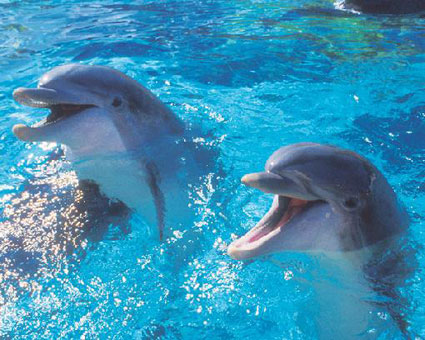 Over the years Capt. Karty has observed the local Bottlenose population demonstrate their ability to adapt to their surroundings and modify their feeding habits. The dolphins now tend to follow the boats that they see out there every day and they learn which boats are successful. When releasing fish, Capt. Karty feels the need to act diligently to prevent our released fish from turning into a lazy lunch for a smart dolphin.

Dolphins live between 40 and 50 years. In the wild, dolphins can live to be 50 years old, although the average age is 17 years. A recent study compared the endurance of dolphins in captivity from 1940 through 1992. It found no significant difference between the captive population and the Sarasota Bay population. The life expectancy for the captive population was reported to be 17.4 years. However in captivity, dolphins have reached ages over 40 years.

Dolphins also communicate through body posturing and jaw popping. They use body language like breaching. The dolphin will jump and fall back into the water with a loud splash. They will also slap their flipper or tail on the water surface.

Dolphins have a blowhole on top of their heads. It is a flap that they can open and close to breathe. Bottlenose dolphins can go for thirty minutes between breaths. Taking a breath takes about 0.3 of a second. The deeper the dolphin dives, the higher the pressure and the more often he will have to surface to breath.

Dolphins have to be conscious to breathe and cannot go into a full deep sleep. They let one half of their brain sleep at a time. EEG studies on dolphins have determined that the halves of a dolphin’s brain take turns sleeping. Dolphins sleep about 8 hours day. REM (Rapid Eye Movement) sleep has been recorded in dolphins, but only very rarely.

Dolphins have two stomachs. One is for storing food and one is for digesting it. In a single day an adult dolphin may consume 30 pounds of fish or more. Dolphins have 100 teeth in their mouths but swallow their fish whole. Their teeth are used for grasping their prey. Bottlenose dolphins eat many kinds of fish, including mullet, mackerel, herring, cod, and squid. 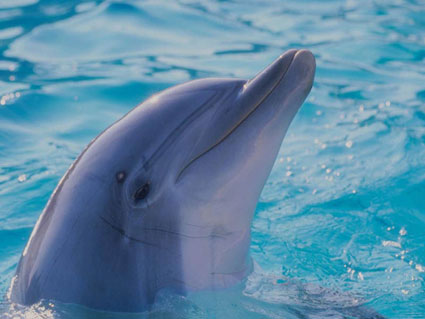 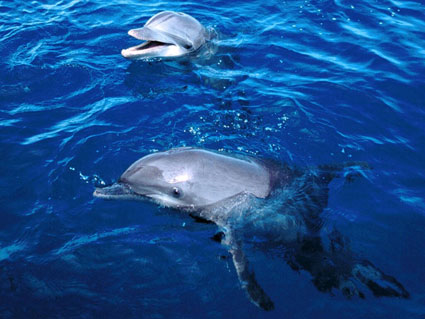 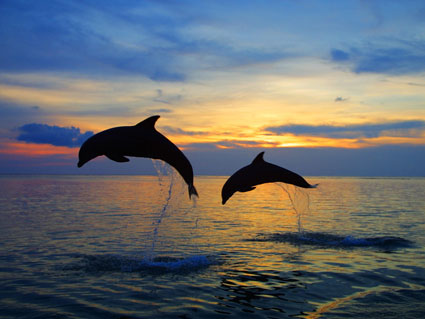 The newborn calf measures between 42"-52" long and weighs about 44 pounds. The calf nurses for up to 18 months. His teeth begin to grow at 3-4 months and he begins to eat fish. The calf can vocalize at birth and his language develops with age. A calf will stay with a mother dolphin for two to three years. 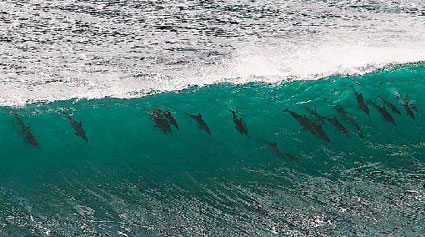 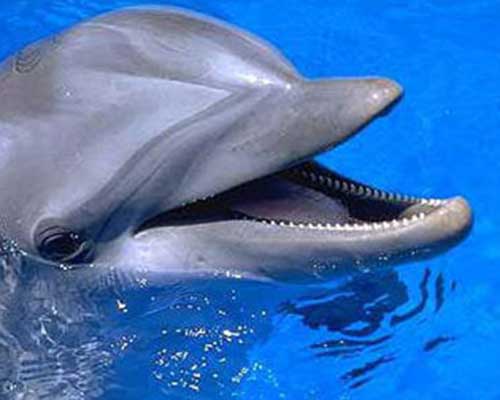